Xmas is upon us and for many of you you’ll likely be planning a 4WD break somewhere in this fabulous country of ours. I’m planning a coastal holiday with some fishing and surfing time, for others it might be in the Flinders or further afield, but whatever the destination some preparation before you go is in order Happy New Year 2018 Quotes  and taking care whilst on the journey is smart too.

Later this week the thermometer is heading for 40C, a teaser for February when more days than not we’ll be heading for the old “ton”. That temperature raises hell with humans and vehicles, so make sure you personally stay hydrated and so too the 4WD.

Personal hydration means consumption of plenty of fluids and this Government web article is useful even though it talks in general terms about the effects of heat on humans, have a read http://www.healthinsite.gov.au/article/hot-weather

Not keeping your fluid levels in check might cause some real issues later in the day and later in life. In the short term, being dehydrated can cause disorientation and bring on the early onset of fatigue. In the long term you might end up with kidney stones and let me tell you the pain is excruciating! Tired drivers make mistakes and the last thing you want is losing your vehicle and injury or death to a rollover. When you’re a long way from civilisation help takes FOREVER to get there and its pretty demoralising even with the best technologies. We hire satellite phones which afford the best remote area contact with the outside world and rates are inexpensive, read about them here  http://www.adventure4wd.com.au/hire-equipment/satphones

As for your vehicle, getting the cooling system checked out is really smart. If you’ve been doing some playing in mud over Winter there’s a pretty good chance the radiator’s surface might be clogged with mud outside of the swept area of the radiator fan. That could mean an easy 30-50% reduction in cooling efficiency and you guessed it, a temperature gauge playing silly buggers when the car is under load. If you’re OK with fixing things mechanical you might need to remove the radiator and its fan shroud to see what I’m talking about. If it is clogged don’t be tempted to use high pressure washers because you’ll damage the fragile fins made of lightweight aluminium, better to lightly wash running water over the muddy face to irrigate the debris out of the core. Once you’re done hold the radiator aloft and stare at the sky. You should be able to see daylight between the fins, if not, wash it again. Have a look too at the hoses and clamps and if there’s the slightest question mark on any of them, throw them out and replace with new. Don’t forget the heater core hoses might be perished if the obvious ones are too. The heater core (radiator) will be inside the vehicle’s cabin and the hoses link to the motor via the vehicle’s firewall.

Don’t set unrealistic daily distances to travel. You need to break the journey into 2 hourly bite-sized chunks and don’t forget plenty of prangs happen within the first hour of leaving home, so if on Boxing Day you fall out of bed at a super-early time, watch out for when you start nodding-off, that’s a sign you’re fatigued and a crash is imminent. Try to get a solid uninterrupted 8 hours sleep the night before so you’re well-rested, break the drive after 2, do no more than 8 as a solo driver (better if you can share the task with a partner).

On the dirt keep your speed DOWN, anything up to 80kmh might be OK as a reasonably safe maximum, but it comes down to the prevailing conditions on the road at that time. If you couple that slower speed up to using HIGH 4WD on those dirt transit legs, you’ll go a long way to defeating the risk of rollover and don’t forget to use your headlights 24/7. You need to be seen by other road users and its another small way to remain highly visible to the rest of the world. 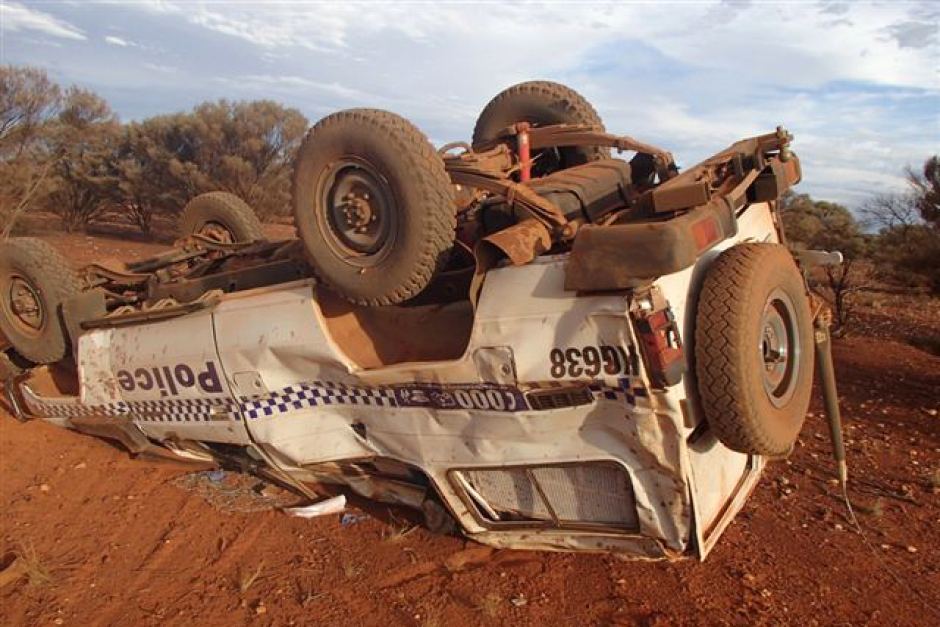 Pic Above: This WA Police troop carrier fell over near Laverton in the West. The result is a write-off and injuries to the officers inside. Note the HF antenna pinned to the earth and no good to anyone now.