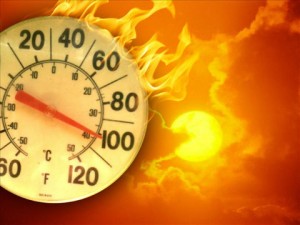 Government and industry business usually doesn’t take much of a holiday over summer, so whilst the rest of the world is kicking back and relaxing, plenty of dedicated souls are attending to the management of public lands and infrastructure. Earlier in the year we analysed what challenges the Outback posed in winter. Six months later some of the risks are the same but the daytime temperatures are likely 2-3 times greater, so the margin for error is a whole lot less.

There’s likely to be another challenge thrown in for good measure this summer and that’s an increased risk of monsoonal weather patterns dumping huge amounts of rain across the interior. There’s always a risk of this from November to April, but in the summer of 2014-2015 I reckon the north is in for a drenching after last year’s absent weather patterns.

Lots of Outback tracks cop a lot of traffic during winter so care needs to be exercised and especially at floodways. If a watercourse has run a banker and scoured out the base of the crossing the surface will be battered, so a reduction in speed is warranted.

As we’d said before it goes without saying that the best grip on dirt is found using HIGH range and accompanying that is a need for tyre pressure reduction accompanied by a reduction in speed. The benefits with this combination are three-fold, firstly greater control, secondly greater grip and braking performance and lastly reduced puncture susceptibility.

We won’t go over too much old ground here because the rules for driving over muddy ground in summer are the same as driving in winter. But what I would like to canvass is heat and its affect on person and vehicle.

Your 4WD’s cooling system is its lifeblood and if it’s not in good condition it’ll fail in near 50C degree heat on a typical summer’s day. The under bonnet temperatures of a modern 4WD are incredible, those diesels (read all of them) that run a turbocharger, a device that hangs off the exhaust side of the engine, forces air into the induction side to boost performance. It all works well, but is affected by temperature.

The hotter the air going into the motor, the poorer the performance, so an intercooler is fitted to counter that negative effect and restore driveability. But the heat exchanged has to go somewhere and an inefficient radiator and coolant/catchment system will create trouble.

There’s a reasonable expectation that on a near new 4WD the cooling system will be in pretty good nick, but I’ve seen problems occur that could have been avoided.

One of the first issues is servicing and frequency. A lot of vehicle dealerships have no concept of the work remote area employees undertake and where their vehicles go. Their concept of servicing is following the service recommendations offered by the vehicle maker, written for a modest usage with a heavy emphasis around town.

If the vehicle is being used as a genuine 4WD then that clearly won’t be good enough.

At the start of summer there’ll need to be some money spent on consumables, a fresh air filter (with a spare up your sleeve) is a great start, a new dose of coolant with the appropriate glycol mix and possibly a new set of hoses (top and bottom radiator, heater hoses) might be required dependent on kilometres travelled. Whilst you’re looking at the hoses check the clamps. The typical prise-on, prise-off clamps are OK if they’re OK, but I’ve seen them break. I prefer the worm drive stainless variety, much more positive.

What’s the benefit of the new air filter I hear you say? Simply, if the car can’t get fresh air without impediment it’ll try and scavenge air from wherever it can find it. Another problem is that the engine may then over-fuel (most modern ECUs will compensate) which can add more heat to the combustion process. Engine performance will suffer, more fuel will be used, perhaps even engine failure in a worst case?

Whilst the 4WD is in the shop get them to pull the grille off the front of the car and check the clearance of the radiator and also if there’s a transmission cooler and an air conditioner condenser, check those too. It doesn’t take too many bugs to restrict air flow to critical levels.

We’ve got the car covered but what about you?

Trip planning and preparation is essential, so too effective communications. How about your health? If you’re carrying a bit of baggage around the waist these days that’ll put you under a bit of stress if you need to get out and fix something. The physical exertion of fixing a flat tyre on a 47C degree day is right up there. So if fix you must, then fix it smartly!

Wear a hat, drive the car under some shade (if it exists) and do the exercise in bite-sized chunks. Little segmented elements interspersed with a cool drink will keep you functioning. Getting hot and bothered is a quick trip to major trouble on a remote bush track in summer.

Denied enough moisture your brain won’t function. Add physical exertion after being in an air-conditioned 4WD and you’ll be lulled into a false sense of security. I’ve seen perfectly rational people simply walk off into the sand dunes unaware they’ve drunk nowhere near enough water. It’s not pretty after the event either, feeling like you want to vomit, and can’t keep anything down. That makes re-hydration a little tricky.

Check your agency’s driving policy and the personal hot weather policy with your HR department. It should offer some guidelines to assist you with making decisions on the trip you may need to make.

Drive safely and think smartly, summer’s no time to run into trouble!