Just received a cracker story from our Northern Territory correspondent Tighe McIntyre. I’ve known Tighe for a long time and apart from his affliction with Land Rovers he’s an awesome bloke (yeah I know I’ve gone in to bat for Rovers too in the past)!

Thought that I would share a great story with you.
opera mini app
Two good mates were driving along a road just outside Kalumburu (WA) having a good old yarn, when the passenger dropped his cigarette on the floor on the passenger side of the Toyota Prado. The driver was most upset with him and tried to help him find the cigarette while doing about 70km/h.

As you would expect, the car drifted off the road and the driver has done the big over-correct and ended up rolling the vehicle 3 times.

The passenger was not wearing a seat belt and was thrown out of the Toyota and landed on the ground, with little more than gravel rash to both arms (simply amazing, he should be dead).

The Toyota landed back on its feet. The driver jumped out of the car, most concerned that he had killed his mate. He ran up to his mate who was was still lying on the ground, wondering what the hell had just happened.

The passenger jumped to his feet and started a bit of a fight with fists swinging and all, as his buddy could of killed the two of them. After a few minutes they came to their senses and shook hands and made up. After brushing the dust off each and talking about how lucky they were to be alive, they went back and jumped in the Toyota.

To the owner’s amazement, it started straight up and drove off (after they kicked the remains of the windscreen out)! The photos attached are the Toyota after 5 weeks of driving around town post-accident. Apparently the bugs are a bit of a problem, but it still goes and drives like the day before the accident. They were the funniest, toughest blokes!!! 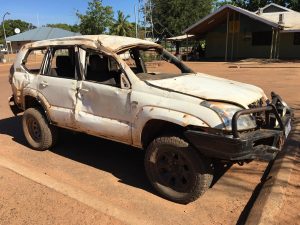 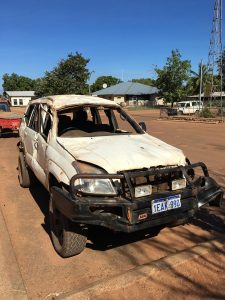 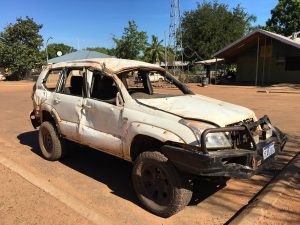 2 Responses to “A Tale Of A Roly-Poly Prado”