There’s a lot of regulation in this country and at times too much lawmaking for lawmaking’s sake, but a recently observed change in the National Training Standard RIIVEH305D (now replaced by RIIVEH305E) where the use of snatch-straps as a viable recovery tool has been dropped, surprised me a little.

Retrieving a vehicle from a bogged situation from the front or rear has always been possible, provided you knew what you were doing and had the right gear. swiggy couponsA snatch-strap is an effective method, if you have a hero vehicle around to assist. Sadly history is littered with failures with these things, where users have paid scant regard to their own and others safety and death and injury has occurred.

You’ve likely seen it yourself, someone hooks a strap up to a tow-ball and pulls, only to see the ball break at its neck and cannon into the other vehicle, parting metal and glass like a bullet. Don’t want to be standing in the way of that one! Another scenario is a vehicle bogged deeper than the chassis line in thick mud and a strap is attached. This time the fixture is the tow point on the front of the vehicle. With a generous tug on the strap the immovable vehicle stays put and the tow point parts company from the vehicle, either shearing at a weld or breaking a bolt. Now I’ve used these points a million times in my working career and never once had a failure, but I’d never use it in a situation where the suction effect of the mud restrains the vehicle’s escape by adding an enormous load to the exercise as I’m suggesting here.

Demonstrations of the snatch-strap have been difficult in recent months as some of my clients don’t want it taught when the vehicles involved don’t have appropriate points. Fair call. In this risk averse world where plenty of folk are ready to point the finger and commonsense goes out the window, taking another smarter approach rubs out the potential for failure. So it is that that great Australian 4WD accessory house ARB recently released its range of bright red recovery points for bespoke fitment to new vehicles.

On our training DMAX we’ve opted for fitting a pair of them on the right and left hand chassis rails. As they’re designed for each individual vehicle make and model, they are not interchangeable, but they are compatible with ARB’s range of bullbars that you might have already fitted to your truck. That made fitment easy for us as the bar was dropped, the recovery points bolted on and the bar replaced, in the space of around 3 hours.

The finished result looks professional and sturdy and obvious!

In my humble opinion whilst the original Isuzu towing “eye” was satisfactory as a fixture for all but the very worst of situations, this ARB unit will cope with all. The point is tied to the chassis rail and triangulated at a number of points, so the chances of it coming off are just about non-existent. You can be confident this will last. Another feature that surprised me was that ARB state that the point can be used in an “off-centre” retrieval, something that in the past I would have tipped a bucket of water on very quickly.

Traditionally I’ve taught that a snatch-strap, or for that matter a winch cable, should only be used in an offset recovery by a maximum angle of around 20 degrees. That’s not much, as I always used to hammer home that the straightest pull is the best pull. On the ARB point it can take a side force up to the maximum steering angle of the front wheels, which could be as much as 45 degrees or more away from centre.

I can remember in the SE of South Australia having to retrieve a vehicle that had taken the plunge into a sand bowl in a coastal dunefield. Couldn’t go forwards or back, so sideways it had to go and with some gentle tugging with a strap on its towpoint, we got the nose around enough for the vehicle to drive out of its predicament. All the while we were effecting this remedy we were mindful that the towpoint wasn’t designed to do that, so having the ARB point certified to do so adds extra security in the field for similar predicaments.

One thing I did note with the included safety card provided was the set-up of the bow shackle to attach the strap to the point. Ordinarily I would always position the end loop of the strap on the flared or “bow” of the shackle and secure via the pin resting on the recovery point. My rationale is that the end loop of the strap can rotate in the bow to achieve its optimum load position without any end loop chafing. The distance between the threaded and plain eyes of the shackle is barely enough width for the end loop and on some I’ve used there’ll likely be a few threads visible that might cut the face of the strap material. Premature strap wear caused by improper fitment can and should be avoided.

The ARB supplied safety card recommends installing the end loop of the strap on the shackle pin between the shackle’s eyes and the bowed area of the shackle then slides to its load point, on the eye of the ARB recovery point. The exact opposite of what I’ve been teaching. I can see that method might be handy for a side-pull, allowing the strap and shackle to rotate freely in the direction it’s being pulled from, but in the dead-ahead I’m going to stick to my guns and allow the strap the freedom to settle along the radius of the bow without binding, as it would do if installed against the pin.

Despite the deletion from RIIVEH305E I think that if you’ve got yourself equipped with a pair of these you can confidently go ahead and retrieve in total confidence of the outcome, Nanny-State no more!

So what do I think of the ARB Recovery Point??? Well if it’s an ARB product you can always be sure of its engineering pedigree. This one’s no different. It’s a sturdy piece of kit, well braced and secured, so it makes a pretty essential addition to any owners 4WD vehicle if you’re intending to go bush. Price varies per fitment as each point is vehicle specific. Suggest you call your local ARB branch for advice.

PS Many thanks to our good friends at ARB Morphett Vale. Poor Durran had me postpone on him at least four times between January and June. As each date drew closer something got in the way… many thanks for the ever-helpful service and speedy turnaround. Phone Morphett Vale on 8186 6101, Regency Park on 8244 5001, or Elizabeth on 8252 1599 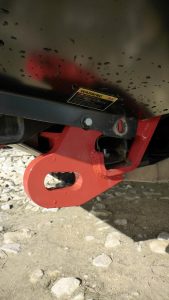 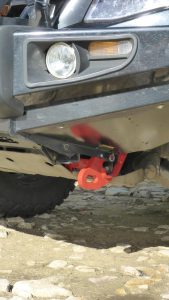