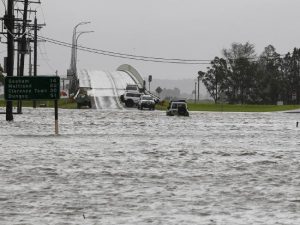 Pic Above: On the way to Seaham in NSW you can expect this every now and again

In recent weeks I’ve been doing a lot of training in watery environments and noting the bigger storm events that have charged across SE Australia with dangerous results. It got me thinking how safe are fording depths suggested by vehicle manufacturers???
tinder without facebook
Every year a dozen Australians die trying to cross a flooded stream with their 4WDs, an action that might seem possible but is extremely foolhardy. I too have been fueled with my own importance and solid belief in my invincible 4WD and remember a time in the Victorian Alps making a crossing in half-metre deep water, that was travelling reasonably quickly. What surprised me was how sketchy the balance of the vehicle and the steering became as soon as we were fully immersed, because it was obvious there were moments when we were near floating.

Now it seems if the stream had been marginally deeper I would have been in seriously deep s..t (or water???)

A study commissioned recently by the NSW Department of Environment and undertaken by the University of NSW, has shown just how little water it takes to unsettle a vehicle.

Using a pretty typical 4WD (in the form of a GU Nissan Patrol and weighing in at around 2,500kgs) and dunking it in a bath in a laboratory, they’ve drawn some interesting facts. Filled to barely 450mm depth the Patrol started to lose its grip on the world and could be moved via the force of water applied to its side without too much trouble. At 950mm it was afloat! Have a look at this time-lapse sequence showing the Patrol in the bath https://www.youtube.com/watch?v=br1jeKjfOVI

That’s pretty scary data as plenty of 4WD owners I know wouldn’t even blink at the prospects of taking on bonnet-high water with or without some preparation.

In the classroom we believe that axle-high depths are usually do-able on a known crossing with a firm base and a gentle-to-no flow across the causeway. We’ve even traversed streams that are wheel height (around 750mm) with some prior planning and a blind installed across the front of the vehicle to restrict water ingress into the engine bay. But deeper… I don’t know, there’s too many variables?

Well there’s a bunch of breathers that come off the differentials, the gearbox and the transfer case and vent to the outside world at a higher point in the chassis (get under your fourbie and look on the top of the differential housings and you’ll see a valve and a tube that’s clamped to it). These gear housings get hot as they do their work and the resultant pressure that builds up inside has to expand somewhere, so the valve provides that pressure relief.The hot air rises up the hose and escapes at a level where water intrusion isn’t likely. 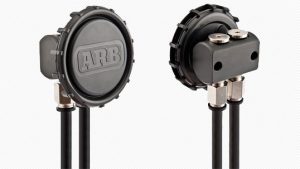 Pic Above: ARB make diff breather kits for all makes and models of 4WD if you’re looking to get the tallest point into your vehicle

A breather with no extension means a dunking in water will be rewarded with a contaminated gear assembly and early corrosion if not attended to immediately. Some makers send their vehicles out this way and that’s why their safe fording depths are quoted on the low side, perhaps as little as 300mm or so. With an elevated entry point, a breather with hose attached offers deeper fording capability, but not at the expense of those precious gear clusters. However an overly ambitious quoted fording depth might enhance the perceived capability, dare I say manliness of the vehicle, to a point where it’s patently unsafe.

Another consideration is where the vehicle’s engine breathes from? An internal combustion engine (diesel or petrol) needs fuel and air to work. If you open the bonnet on your vehicle and locate the air filter box you’ll see a connection to the inner wheel-arch. That tells us that the engine draws its air from the void found in the space between the plastic inner-liner of the wheel-arch and the metal mudguard assembly. Fed by air forced in around the radiator grille, this supply remains relatively dust-free, drawn past the air filter and ultimately into the engine.If the depth however is up around the top of the guard you might be asking for trouble!

Some owners opt to put an aftermarket snorkel on their vehicles, a plastic duct with an opening around the top of the windscreen that follows down the front window pillar and along the mudguard, then plumbed directly into the airbox. You could be lulled into thinking with one of these you’ve got all bases covered, and a plunge into a stream might then reward you with aquarium views if you dared go in deep enough! Nope, I didn’t think so!

So if you were a Ford Ranger owner and buoyed by Ford’s claim of an 800mm fording depth what might that do for you? Well if the 4WD Gods were looking after you and you made the perfect entry and exit from a pond of still water, you might be thinking you’re pretty clever. But if the stream was flowing and you weren’t paying enough attention to the depth you might find your Ranger becomes a canoe and floats downstream with an unknown fate.

Emergency services regularly warn of the perils of crossing such streams. Perhaps it’s about time we took heed of their advice?

Pic Above: Sadly a chap lost his life in this one in the ACT and I doubt his snorkel helped at all. If it’s fast-flowing don’t attempt it, it might be the last thing you do!

Pic Above: Added little challenge here is the prospect of bitey things in the water!

Pic Above: Another peril of water crossings is the fragility of number plates! Look closely and you’ll see what I mean.